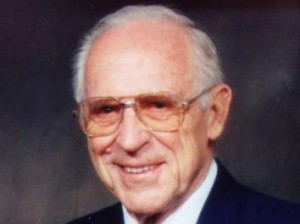 It’s pretty impressive for anyone, but especially for a 99-year-old.

Wade, an employee of real-estate firm Coldwell Banker since 1999, says he is still working 20 or so hours a week because he just loves his job. “I’ve thought about [retiring], but what would I do?” he asks. “I enjoy real estate so much it would be hard to leave.”

It’s been a long time since Wade took his first job during high school in a local pharmacy. Back then, he explains, you didn’t need a degree to be a pharmacist—you just had to spend enough time working under one and then pass an examination.

That was in the 1930s, and Wade first got into the real-estate business in the late 1960s. He knew right away that he had found the career for him. “It’s the people you meet and the interaction with those people,” he explains. “And then what happens afterward. Forty years later you go to the supermarket and someone walks up to you and says, ‘You sold my father his house!'”

Today, Wade estimates he spends 90 percent of his time working from his home in Waimanalo, Hawaii. On a day-to-day basis, he calls and visits past clients, negotiates home sales, and shows properties. In his free time, he attends the local country club and also volunteers at the Boy Scouts and the YMCA. Wade believes a good attitude and regular exercise have helped him lead such a long and happy life. “Attitude is so important,” he says. He also advises having clear-cut goals and realizing that there’s more to life than money.

Finally, for those people approaching retirement age (typically 65 to 70 in the U.S.), Wade says don’t be afraid to keep going. In fact, his best years of work were recent ones.

“I made more money in my 80s than I ever did in the rest of my life,” he says. “I was very healthy and very vigorous.”

This website uses cookies to improve your experience while you navigate through the website. Out of these, the cookies that are categorized as necessary are stored on your browser as they are essential for the working of basic functionalities of the website. We also use third-party cookies that help us analyze and understand how you use this website. These cookies will be stored in your browser only with your consent. You also have the option to opt-out of these cookies. But opting out of some of these cookies may affect your browsing experience.
Necessary Altijd ingeschakeld
Necessary cookies are absolutely essential for the website to function properly. These cookies ensure basic functionalities and security features of the website, anonymously.
Functional
Functional cookies help to perform certain functionalities like sharing the content of the website on social media platforms, collect feedbacks, and other third-party features.
Performance
Performance cookies are used to understand and analyze the key performance indexes of the website which helps in delivering a better user experience for the visitors.
Analytics
Analytical cookies are used to understand how visitors interact with the website. These cookies help provide information on metrics the number of visitors, bounce rate, traffic source, etc.
Advertisement
Advertisement cookies are used to provide visitors with relevant ads and marketing campaigns. These cookies track visitors across websites and collect information to provide customized ads.
Others
Other uncategorized cookies are those that are being analyzed and have not been classified into a category as yet.
OPSLAAN & ACCEPTEREN